A delegation of 22 senior decision makers from China’s Ministry of Commerce (MOFCOM)-China Investment Promotion Agency (CIPA) completed a week long visit to Purdue University and the State of Indiana on July 31st. 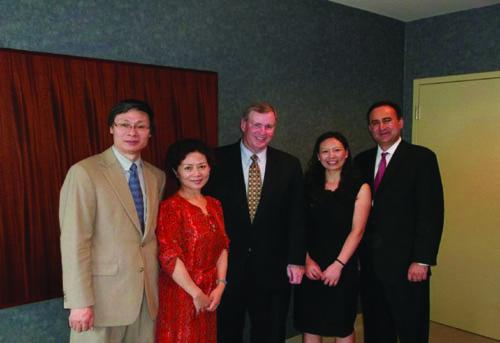 The delegation was comprised of representatives from 10 provinces in China whose responsibility is to help Chinese companies invest abroad and also to attract investment from foreign countries to China.

Some of the provinces represented included but was not limited to Hunan, Hubei, Shandong and Guangdong. During the visit Purdue University through its Global Business Engagement Office (GBE) and with the support of Indiana Economic Development Corporation (IEDC) as well as local communities in West Lafayette, Columbus, Davis County and French Lick hosted seminars, factory and site tours, briefings, luncheons and receptions designed to show case investment opportunities in Indiana.

The delegation was particularly impressed by Indiana’s specialized engineering and high end manufacturing companies, specialist logistics and warehousing facilities, bio-sciences and nano-technology capabilities not to mention the state’s role as a significant agricultural exporter.

This was the first visit by a delegation from MOFCOM and CIPA to Indiana. Commenting on the prospects for future investments from China to Indiana Mr. Chuanshui Zhong advisor on the project said “Indiana is ideally positioned to benefit in the future from Chinese investment given that many of the technologies that the state possesses can directly benefit China’s economy. There are numerous companies both at the state level and at the provincial level that are interested in investing in America. Such a visit lays the ground work for future investments by creating familiarization and linkages between counterparties in Indiana and China. And also in the future can create a greater awareness for investments in other parts of America.”

Asoka Ranaweera advisor to the project noted “This is one of the first delegation’s to visit a state other than the big US states such as California and New York. Chinese investment in America will reach a record high this year exceeding total direct investments of around $7.9 billion reached in 2007. Yet investments from China pale in comparison to the size of the US economy whose GDP is around $15 trillion. We believe America offers Chinese companies and investors some of the best opportunities in the world today and we are facilitating, driving and advocating for greater Chinese investment in the U.S. through our relationships in China both at the central and provincial level which we firmly believe can be a win-win situation for both countries. The opportunities for American’s to benefit from Chinese investment is significant and is at its earliest stage.”